The National Tidal Centre (NTC) of the Bureau of Meteorology is responsible for monitoring tide gauges around Australia. It publishes its annual report3 on sea level data from 'The Australian Baseline Sea Level Monitoring Project'. 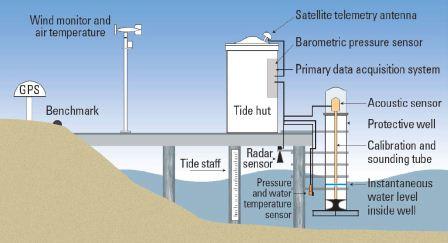 Some locals have erroneously concluded that sea level rise on the south coast of NSW is less than 1 mm a year, based on data from the Port Kembla tide gauge. This is a consequence of the wrong data being sourced from the NTC's annual report3.

The trend of sea level relative to the land at Port Kembla is about 3.2 mm a year (Table 2, column 3 of the 2010-11 report), which is what is relevant for local impact studies because it is the actual local sea level rise. It also perchance happens to equal concurrent global sea level rise.

If you deduct the component caused by changes in atmospheric pressure at Port Kembla from the observed 3.2 mm a year then you get the net relative sea level trend of 2.6 mm a year (Table 5 of the report). Although this is not the actual sea level rise at Port Kembla, this correction is useful to scientists for determining the magnitude of atmospheric pressure influences across regions and seasons.

Table 5 (Port Kembla only). The net relative sea level trend estimates to June 2011 after vertical movements in the observing platform relative to a local land benchmark and the inverted barometric pressure effect are taken into account.

The other issue causing confusion is that the rate of sea level rise varies considerably between regions and seasons. Contributing factors are oceanic currents, temperatures and salinity, along with the substantial influence of the El Niño - Southern Oscillation (ENSO) and other climate systems4. Data from tide gauges and satellite altimeters are confirming that the underlying global trend continues to rise as displayed by the CSIRO Marine and Atmospheric Research http://www.cmar.csiro.au/sealevel/ consistent with the worst-case IPCC projections.