The Indian Myna (Acriodotheres tristus), also known as the Common Myna, was intentionally introduced to Australia from southern Asia in the late 1860s to control insects in the fields around Melbourne. The population rapidly established along the eastern coast of Australia, and they are now commonly found in urban environments and agricultural areas.

Indian Mynas are scavengers and are able to utilise a wide range of food types including insects, fruits, vegetables, pet food and stock feed.

At night they gather to sleep in communal roosts in large dense trees or buildings.

Why they're considered a pest

Indian Mynas are ranked as one of the world's 100 most invasive species (International Union for Conservation of Nature). They are:

The Indian Myna (Common Myna) is a chocolate brown bird, about 12cm tall, with a black head and neck. A striking yellow beak, eye patch, feet and legs are also distinguishing features.

Although both species have similar common names, the Noisy Miner is a native honeyeater. Both of these species have yellow bills, legs and bare eye skin, however, the Common Myna has large white wing patches that are visible when in flight. 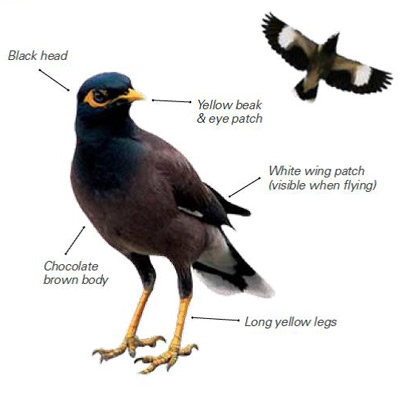 What Council is doing

More than nine years of persistence and community collaboration has resulted in a growing number of areas across Eurobodalla Shire now free of Indian Mynas.

Council initiated the shire-wide Indian Myna Control Program to limit the population of these destructive birds in 2009 by offering residents volunteer-made traps to humanely catch Indian Mynas for the purpose of euthanasia, and Council continues to support this vital environmental program.

You can contact Council to borrow a trap or seek assistance with trapping.

What you can do to help

Whilst trapping has been considerably successful in reducing Myna numbers in Eurobodalla shire residents' backyards, there are a number of things you can do easily and immediately to help reduce the prevalence of Indian Mynas in your local area, such as:

If you need more information about the Indian Myna Control Program, or if you would like to report a sighting or nesting activity, please contact Council’s Natural Resource Officer, Courtney Fink-Downes: