There are currently six known camps in Eurobodalla Shire consistently occupied by flying-foxes. We have monitored these camps regularly since 2016.

This page provides a summary of each camp's context, history, population, ecological values and latest information. A full assessment of all camps known in the shire is available in Section 6 of the Eurobodalla Flying-fox Management Plan:

The proximity of the camps to residences, towns and sensitive receptors (hospitals, schools, etc,) increases the likelihood for conflict between flying-foxes and people. Council acknowledges there may be other unknown camps in the Eurobodalla Shire area at any time but while they remain unknown and trigger no cause for conflict, they do not require active management by Council.

This map indicates the locations of known flying-fox camps within Eurobodalla Shire.

Camps are the home for flying-foxes during the day, and the animals forage at night, often travelling long distances for food.

The Water Gardens is a six-hectare wetland park close to the Batemans Bay town centre. The Gardens is Council-managed land, with the area occupied by flying-foxes also extending onto private land.

The Water Gardens site is a natural drainage area that was once used for stock grazing. The site vegetation is Swamp Oak Floodplain Forest, which is listed in NSW as an Endangered Ecological Community (EEC). The land is zoned for Environmental Conservation.

In 1989, the Batemans Bay Historical Society requested Council redevelop the site into a town park.

The Water Gardens opened in 1999, managed by a community-driven committee.

By 2012, Council had resumed management of the site. The regrowing vegetation was bordering many residential properties surrounding the park.

Flying foxes at the Water Gardens

Grey-headed flying-foxes have been officially recorded at the Water Gardens since 2012. Though there are some reports of them occupying the site in small numbers before 2012.

In 2015, in response to this increase, Council developed the Water Gardens Grey-headed Flying-fox Management Plan 2015. This plan prioritised management options to reduce impacts on residents and businesses. Options included removing the overgrown vegetation to re-instate buffers between residences.

In mid-2016, a mass-flowering of spotted gum and red bloodwood occurred in the region’s forests. This flowering attracted hundreds of thousands of flying-foxes to Batemans Bay.

The Green Army installed wildlife cameras to monitor native and feral animals and nest boxes in the tree canopy for birds and gliders.

Council installed a water pump and canopy sprinklers to discourage flying-foxes from roosting in the vegetation nearest to houses.

Unfortunately, some people use the Water Gardens to dispose of rubbish or dump shopping trolleys. Council rangers issue fines for littering, so if you see somebody doing the wrong thing, please report it to Council on 4474 1000.

The camp on the Club Catalina golf course is on land zoned as Environmental Conservation, along Hanging Rock Creek in Batemans Bay. The vegetation is Swamp Sclerophyll Forest on Coastal Floodplain or Coastal Swamp Oak Forest which is listed as an endangered ecological community by the Australian Government under the Environment Protection and Conservation Act 1999.

The population at this camp has always been less than 5000 except in May 2016 when more than 120,000 flying-foxes used the existing camp and spilled over into the surrounding residential and forest areas.

At its largest, the Catalina camp covered 18.74 hectare. The persistent flying-fox camp is concentrated on the central area of vegetation near the waterways.

In 2016 more than 270,000 Grey-headed flying-foxes congregated within Batemans Bay. This was approximately 40% of the entire species population counted in May 2016.

The flying-foxes were attracted by a mass flowering event of spotted gum (Corymbia maculata) and red bloodwood (Corymbia gummifera).

During this time, flying-foxes occupied the Water Gardens and Catalina camps, and extended into vegetation in residential areas surrounding the camps. This caused significant conflict with residents, many of whom had not been impacted by flying-foxes before.

Council requested approval to carry out dispersal activities and the Minister for the Environment granted a National Interest Exemption under s158 of the Environment Protection and Biodiversity Conservation Act 1999 to allow dispersal of the flying-foxes and more severe vegetation management at the camps. This exemption was conditional on the development of a Conservation Agreement, which led to development of the Eurobodalla Flying-fox Management Plan.

Flying fox numbers had already begun to decrease naturally by the time dispersal activities began, so the dispersal was successful in reducing the remaining populations from undesirable locations.

In accordance with the EPBC Act Referral Guideline, no additional vegetation removal is possible at the Water Gardens without referral to the Australian Environment Minister.

Council now has a five-year Threatened Species Licence to manage for flying-fox camp dispersal in Batemans Bay. The decision to disperse will be made in line with the management framework in the current Eurobodalla Flying-fox Management Plan. 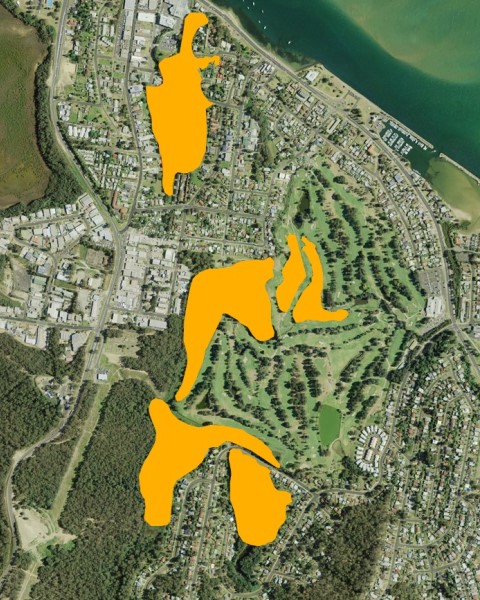 The Moruya Heads camp is located on private land zoned as Environmental Conservation. The vegetation at this camp is mapped as Swamp oak floodplain forest, an Ecologically Endangered Community (EEC).

Flying-foxes occasionally occupy the camp at Moruya Heads. The residences are not as many or as close as some of the other Eurobodalla Shire camps.

In 2013, the National Flying-fox Monitoring Program recorded that 10,000 flying-foxes stayed briefly in February, and 2000 camped there in 2015 at the same time of year.

Council has monitored this camp since 2016 with little no or activity recorded until 2019, when an influx of around 13,000 grey-headed flying-foxes camped there briefly in the early part of the year.

The Tuross Head camp is located on a parcel of vacant privately-owned land zoned as Environmental Living and Low Density Residential. The vacant land is on Hector McWilliam Drive, with residences lining the other side of the road.

Flying-foxes have occupied this camp annually since it was identified in 2017. This camp was monitored as part of the National Flying-fox Monitoring Program with only 100 flying-foxes counted in 2017.

The camp is located away from urban areas and has not been of concern to close residents.

This irregularly occupied camp was monitored as part of the National Flying-fox Monitoring Program in February and May 2013, and December 2017 with no records of flying-foxes recorded. Council has monitored this camp since 2016 with flying-fox numbers equal to or below 400 in the autumn of 2017 and 2018, and creeping up to 3,000 during the autumn months of 2019.

We can help you