Araluen Road begins on the outskirts of Moruya, loosely follows the Deua River through mountainous forest and leads to Araluen and then Braidwood. The narrow, mostly unsealed road is the main access route for properties in the Deua River Valley and Merricumbene.

The 2019/2020 summer bushfires and nine natural disaster floods and storms that followed caused damage on an unprecedented scale and significantly affected the Araluen Road community.

Along with personal, property and environmental impacts, residents have also had to deal with access issues caused by damage to the Council-maintained road network.

Bridges have been destroyed, the road surface has suffered, fire-affected roadside trees present a danger, and multiple roadside slopes have collapsed.

Council has dedicated significant resources to restoring safe access along Araluen Road and has advocated for funding through the NSW and Australian governments' Natural Disaster Relief and Recovery Arrangements.

The challenges are many and Araluen Road remains closed to through traffic. However we are focused on restoring safe access as soon as possible with the aim to provide improved resilience into the future. Additional resources have been engaged to tackle the large volume of work required.

We will update our road closure webpage when Araluen Road is open to through traffic.

The drought followed by bushfire and high rainfall has caused serious damage to the roadside slopes along Araluen Road. Extensive tension cracking and slope movement on both the upper and lower slopes is apparent in many areas.

The locations of the landslides and tension cracking are within mountainous riverside terrain with very steep up and downhill slopes. Instability on both the high and low sides of the road means we cannot simply clear the road of the debris.

We identified numerous sites requiring treatment as a result of the natural disasters. While we have cleared many, others require more specialist extensive investigation.

Work to restore the road at the smaller landslips at the 11km and 14km marks is underway with excavation on the high sides of the road complete, providing a wider road and allowing safer and more efficient stabilisation works of the downhill embankments. The excavated material has been repurposed and placed along the road closer to Moruya (near the water pump station) to widen the road shoulders and improve safety.

Stabilisation works on the downhill slopes at these sites are likely to be undertaken in early 2022. The completed works will provide more stable road platforms and greater road width, making it safer for vehicles to pass.

High rainfall during the February/March 2022 flood has caused significant failures along the road around 18 to 19km from Moruya. The downhill roadside slopes are giving way and are at risk of further collapse. Work is underway to recover sections of the road, using heavy machinery to drill soil nails beneath the road.

This landslide is located on a particularly narrow section of road where the low side of the road is collapsing. If this section of roadway were to suffer further damage, access beyond this point would become problematic. Therefore, this location was given priority.

Contractors have undertaken roadside stabilisation works to reduce the risk of further collapse. The completed works are providing a safer, more resilient road.

Work involved drilling soil nails on the low side of the road to secure the slopes. 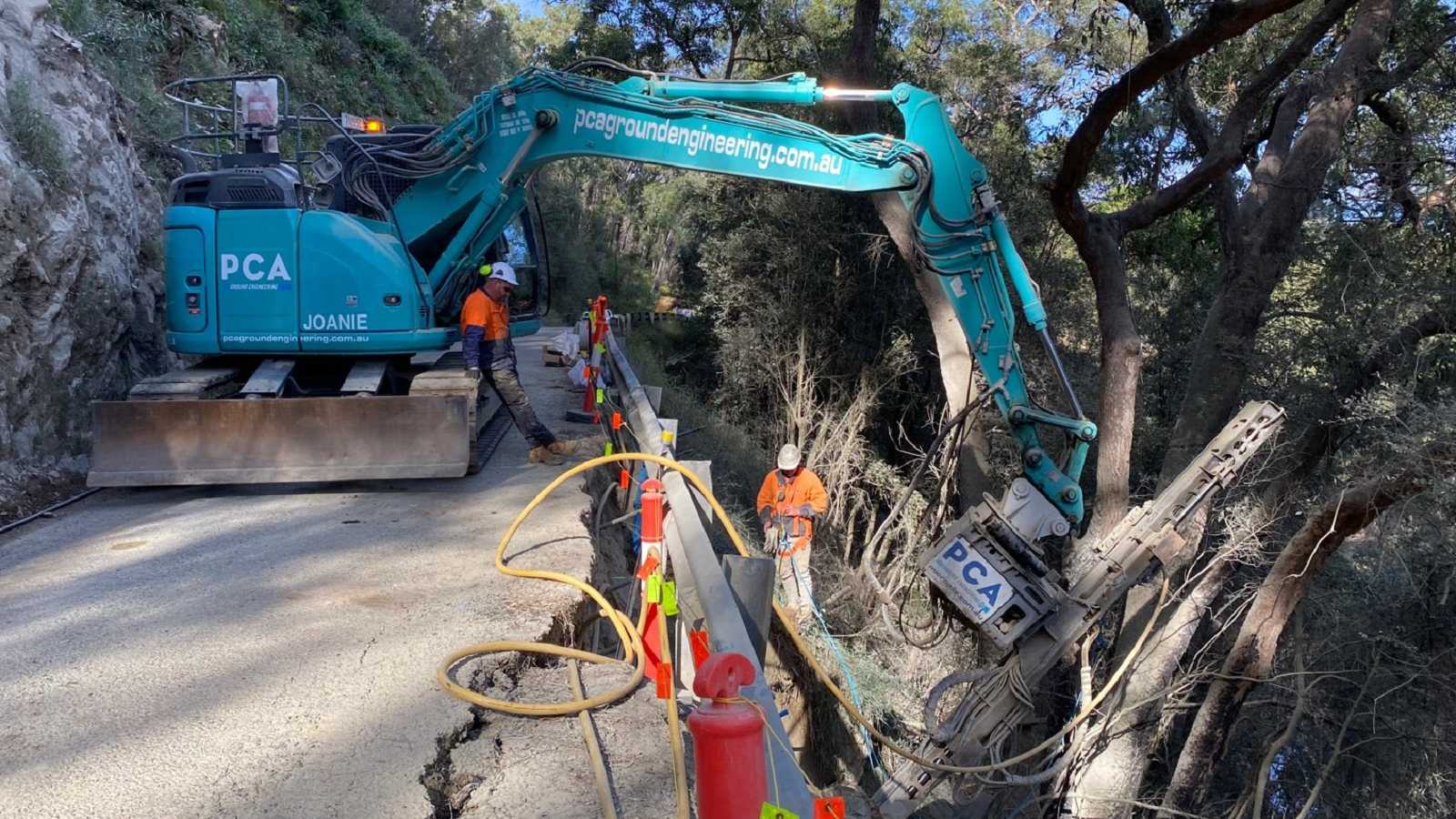 The collapsing roadside had left the guardrail hanging alongside the road. 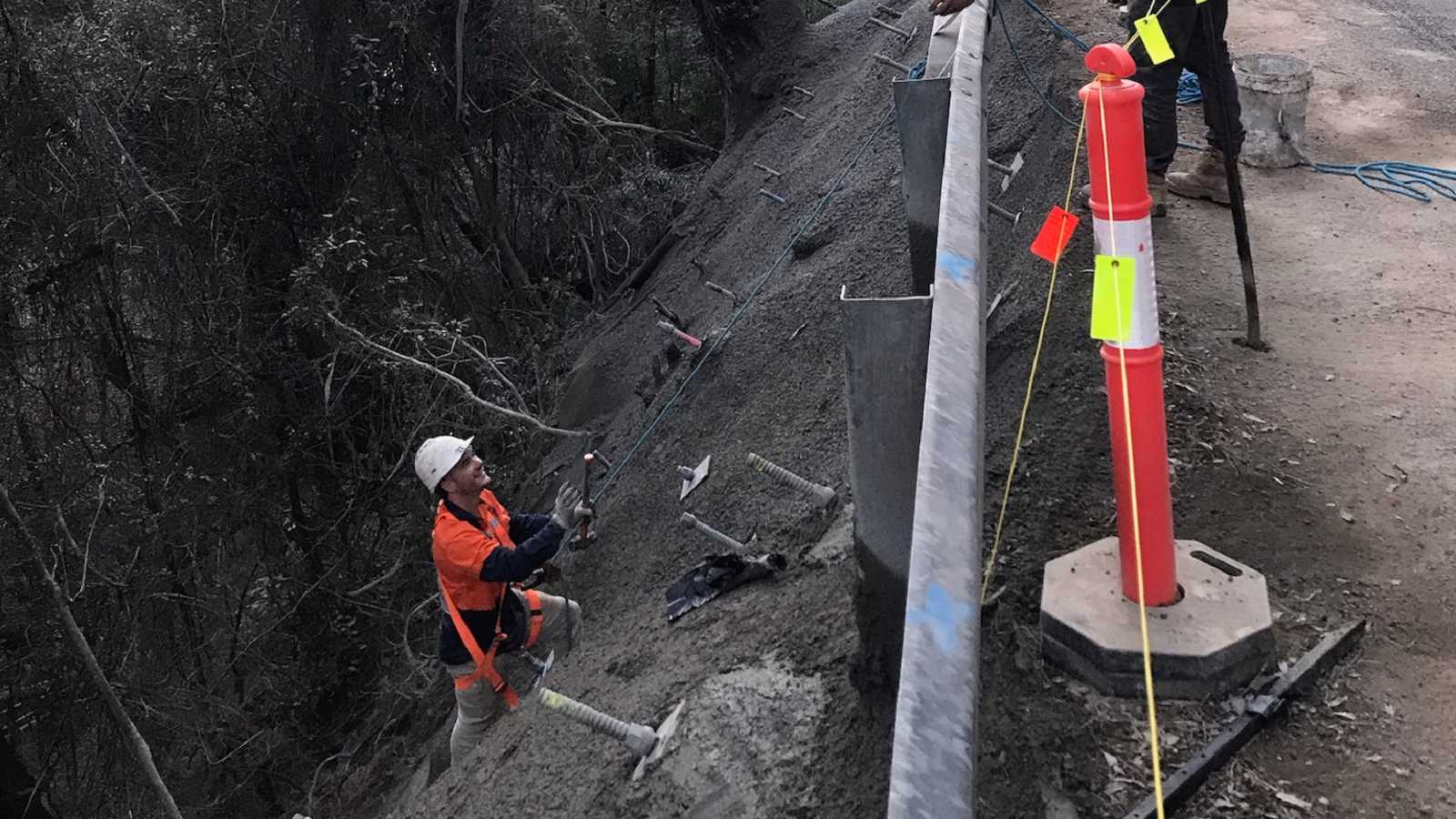 Concreting of the batter face has helped to stabilise the roadside slope.

Other works for this site include:

A large landslide in November 2020 resulted in a complete blockage of the road. Further material came down during the March 2021 floods and other landslides have since occurred nearby.

This major landslide site presented significant challenges due to the unstable rock face and further movement along this stretch of road. Simply clearing the road was not an option as the risk of further landslides is unacceptably high.

Geotechnical coring immediately above and behind the landslide showed highly fractured and unstable materials that would prove difficult to stabilise sufficiently to ensure recovery of a safe route along the existing Araluen Road.

We successfully negotiated an agreement and funding to construct an alternate route around the landslide rather than repairing the existing road. The NSW and Australian governments are providing $3 million through the Natural Disaster Relief and Recovery Arrangements allowing us to create a safer and more resilient solution for the community for the future. 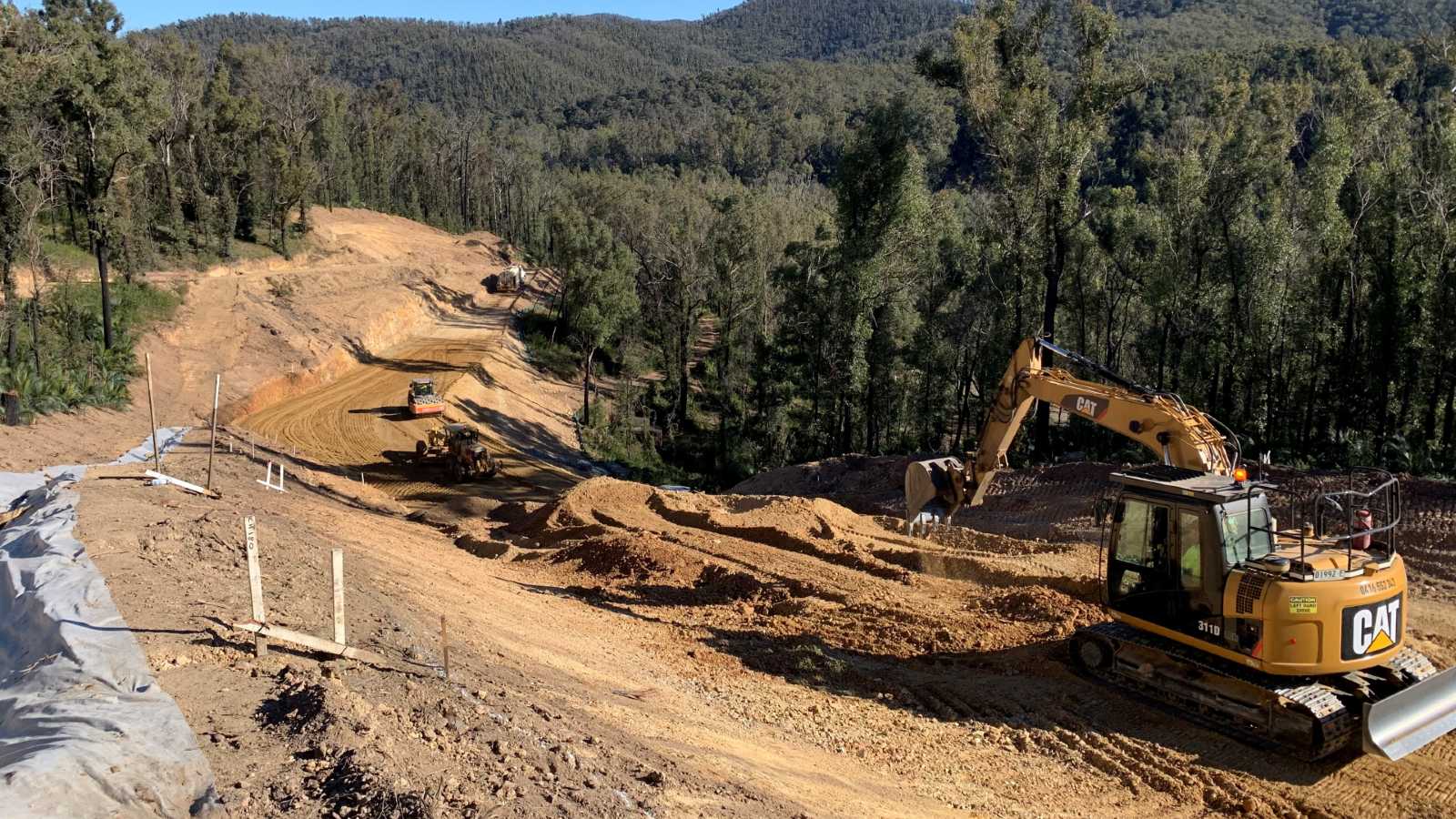 Work began on the construction of the new road on 5 July 2021. 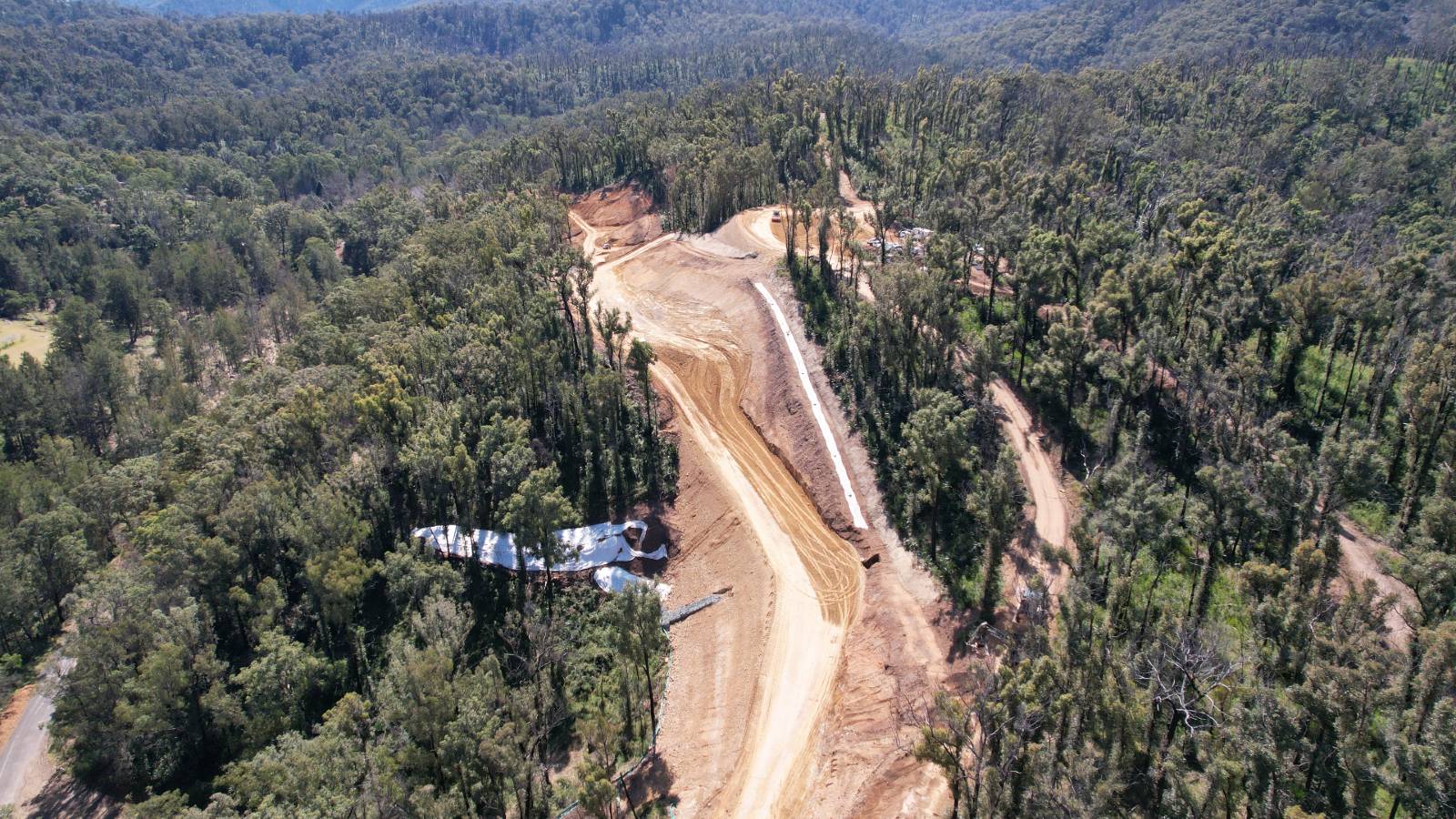 A dozer and scraper prepared the new road. Pipe crossings and catchment drains were installed to provide suitable drainage.

As work progresses so does our remediation of the area; the old road was covered in topsoil and spray seeded with a native grass mix in time for the favourable spring weather.

A detour route was established for Araluen residents while construction of the new road was underway. Unfortunately the detour route was destroyed during a flood in December 2021. The new section of road was opened to essential traffic only to ensure residents could still access their properties. 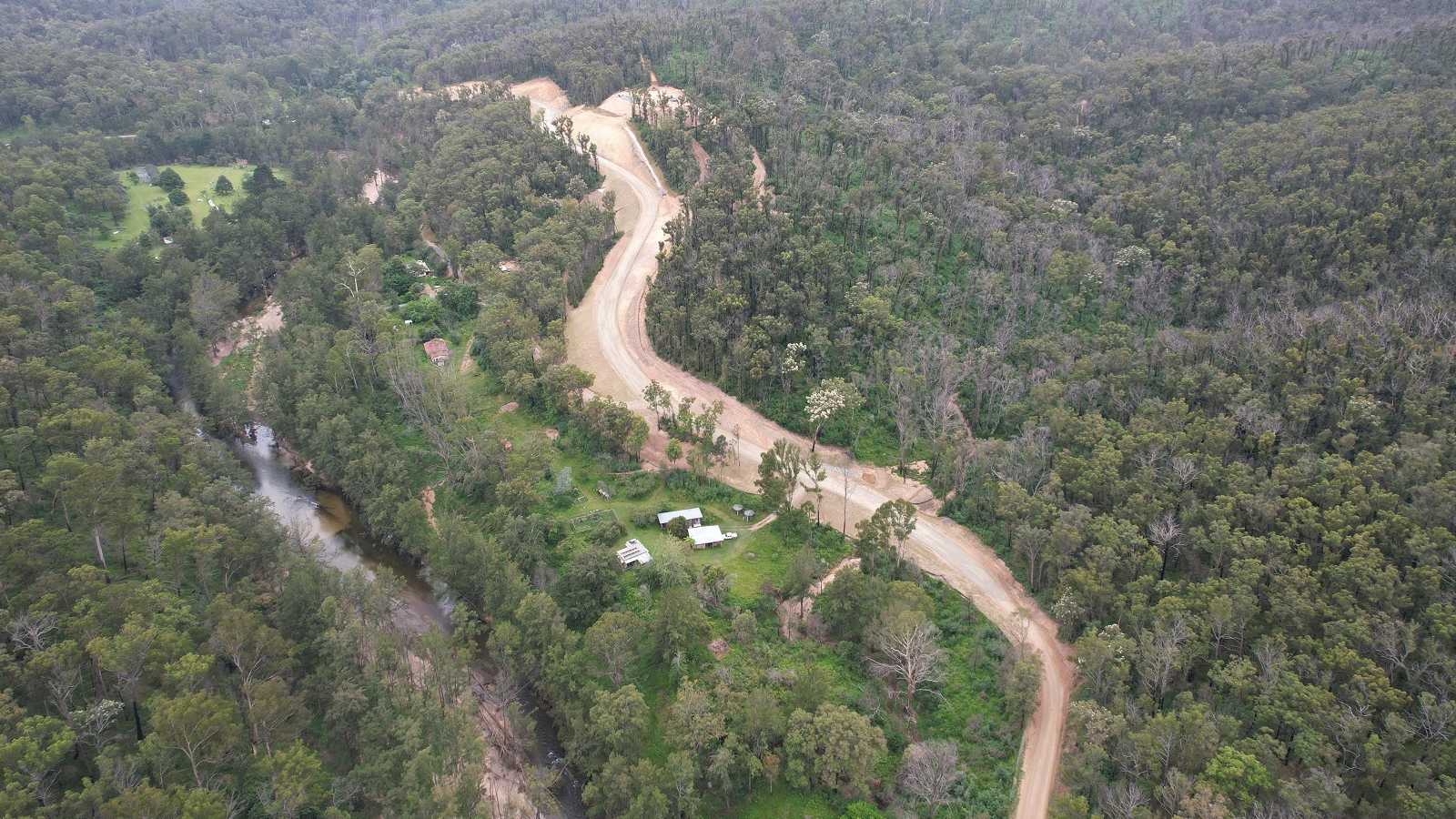 Work continues along this new section but it is now open to the wider community, re-establishing access along Araluen Road from Moruya to the major landslide east of Pigeon Gully.

High rainfall during the February/March 2022 flood has caused significant failures along the road 24km from Moruya. The downhill roadside slopes are falling and are at risk of further collapse. Work is underway to recover sections of the road, using heavy machinery to drill soil nails beneath the road.

43km from Moruya, near Pigeon Gully

The landslide at this site is very complex, with extensive longitudinal failures and steep mountainous slopes on both sides of the road.

Longitudinal cracking on the low side means the road is collapsing over a length of several hundred metres, dropping steeply toward the Deua River. 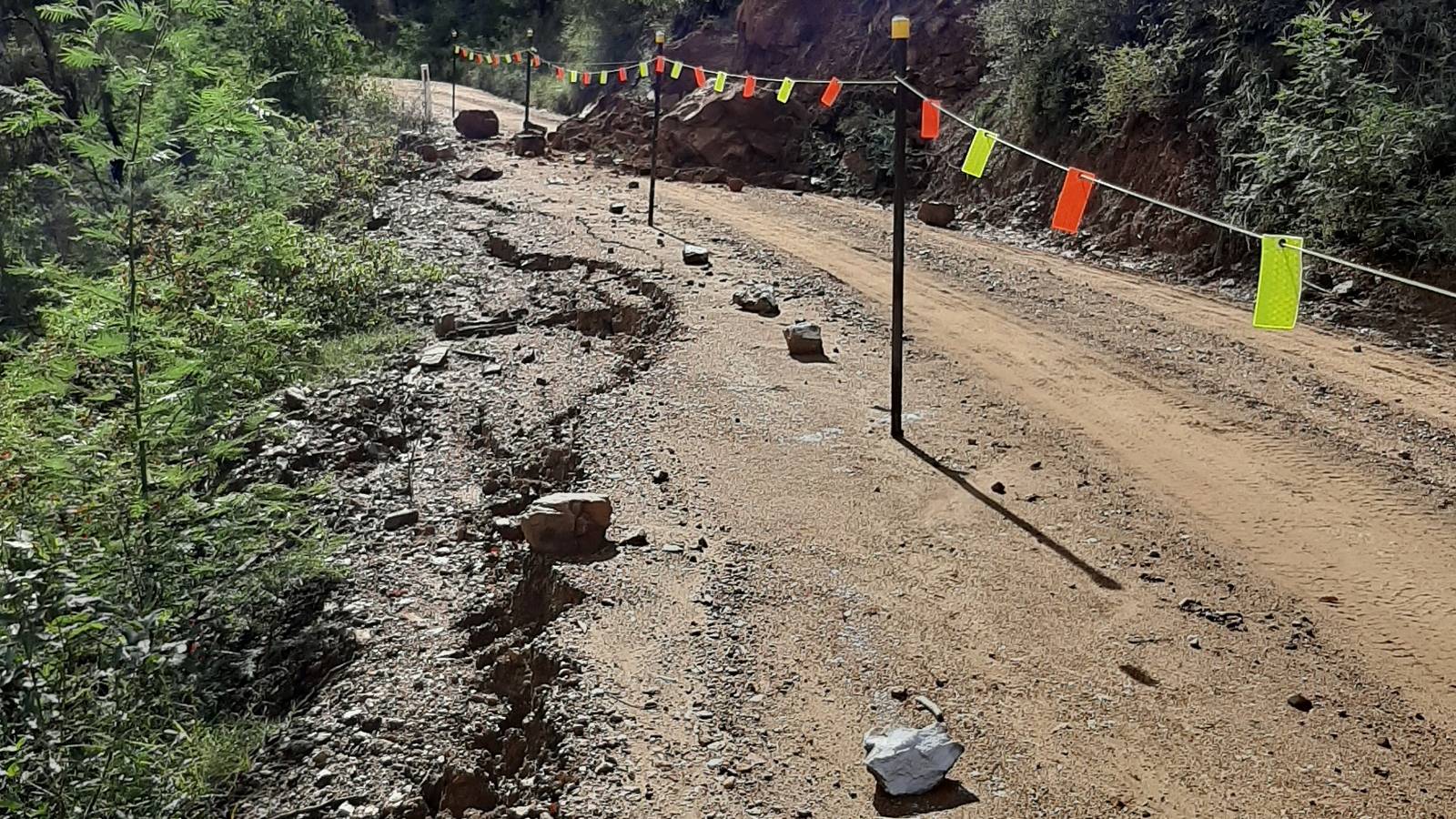 Drone footage at this site shows the landslide is much more significant than first thought. A large slip circle failure has developed well above the road, with a huge volume of material having moved partially down the hill. The drone pictures also confirm the extensive tree death at this location, which is problematic in terms of sequencing any recovery works. 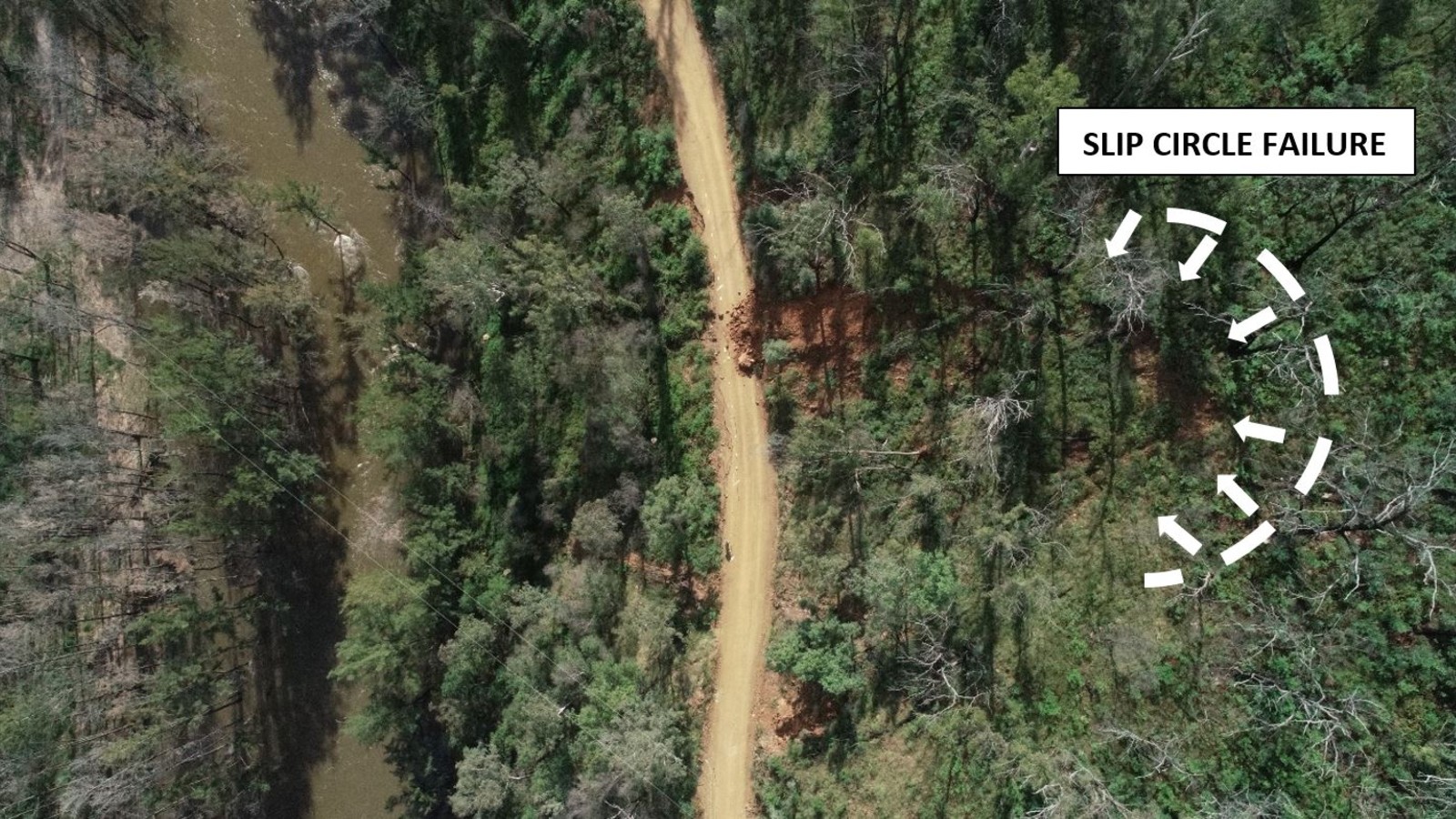 The challenges of this site require a careful and systematic approach, backed by specialist advice, to ensure the safety of workers on-site. NSW Public Works Advisory (PWA) investigated the options to restore safe access. In September 2021 PWA engaged a suitable consultant to undertake the geotechnical and design investigations.

Investigations have found that the option of building a public road around the landslide is not viable due to various issues including high cost and land tenure. We are now committed to recovering the existing road and detailed geotechnical investigation and design works are complete. We have called for tenders to undertake the clean-up, recovery and stabilisation work. Once we have awarded the contract we will be able to provide an expected timeframe.

Given the location and the complexity of the work, its implementation will take considerable time. The road will remain closed for the foreseeable future.

High rainfall has also caused significant failures along the road at Merricumbene. The downhill slopes of the road are collapsing and work is urgently underway to recover the road. Heavy machinery is being used to drill huge nails into the slopes and beneath the road. Work is expected to continue into June 2022. 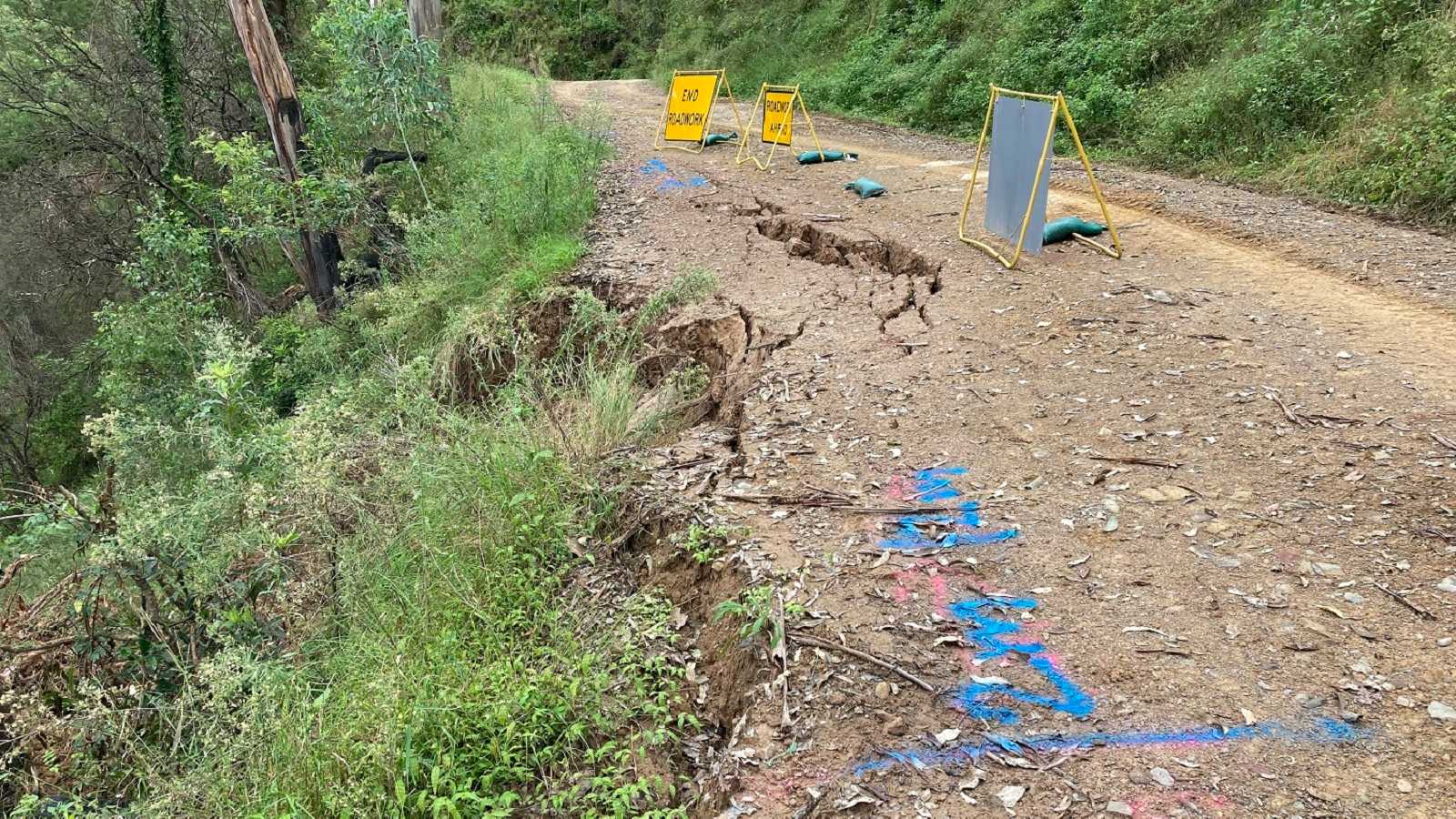 Four timber bridges along Araluen Road have been damaged or destroyed by recent natural disasters. The NSW and Australian Governments have provided financial assistance through the National Disaster Recovery and Relief Arrangements to restore safe access.

To further assist with access to Araluen Road properties we replaced Codys Bridge on Larrys Mountain Road by providing an alternative route in the event of an emergency.

Immediately after the fires our crews inspected and removed hazardous burnt and fallen trees to re-open Araluen Road and reduce the risk to road users.

While regrowth on other trees was initially encouraging, the stress of the prior drought coupled with bushfire resulted in a secondary wave of tree death.

Specialist tree arborists assessments were required to determine which trees need to be removed to keep commuters safe. We engaged a tree crew to selectively remove the dangerous trees. The majority of work is complete between Moruya and the landslide at the 43km mark.

The remaining work (west of the Merricumbene landslide to the shire border) is scheduled for early 2022. We will continue to monitor the roadside trees and undertake further works as necessary.

Also of concern is the extensive emergence of wattle seedlings along the roadsides, creating a dense thicket. We have undertaken roadside spraying in key locations to reduce wattle growth and increase line of site for road users. We plan to spray the roadsides of the full length of Araluen Road.

Our teams are working to deal with both of these issues in a way that leaves our roadsides safer for road users and more resilient in future natural disasters.

We are using funding from the NSW and Australian Governments under the National Disaster Recovery and Relief Arrangements for the tree work.

The road surface of Araluen Road has deteriorated significantly during the natural disasters. Initial damage was caused by an increase in heavy vehicles used in the fires and recovery efforts. Further damage occurred when flooding rains caused a significant loss of road material in many areas.

To help restore a suitable road surface we are undertaking additional gravel resheeting works and maintenance grading, restoring damaged drains and reshaping road edges. Timing of works are subject to the restoration of access for heavy vehicles and availability of access for plant.

Our teams regularly inspect the condition of the roads to ensure they are suitable for traffic, particularly during and after wet weather events. If however, residents notice any significant changes to the road, please let us know as soon as possible.

Araluen Road is now open to traffic along the new road around the first landslide near Knowles Creek in the Deua River Valley.

However, Araluen Road remains closed to all vehicles, cyclists and pedestrians at the second major landslide near Pigeon Gully in Merricumbene. The only detour available is via the Kings Highway.

A 5t load limits was introduced along a section of Araluen following damage during the March 2021 flood. Restoration works at various sites have since enabled this limit to be removed.

Works continue along many sections of Araluen Road and commuters should allow extra travel time. Occasionally we will need to close sections of the road where there is not enough space for vehicles to pass the construction equipment.

Eurobodalla Shire Councillors have agreed to allocate funding under the Local Roads and Community Infrastructure Program to undertake the following resilience improvement works on Araluen Road.

The following works are underway and will continue early in the new year.

The road west of Merricumbene valley (approximately at the 38-39km mark) is being widened by moving part of the road back onto more solid ground. The increased width will allow two vehicles to pass more safely.

Excavated material is being used to fill and widen other sites along the road between Kennys Creek Bridge and the 43km mark to improve safety and stability of the road.

We have been improving drainage between the 33-39km mark by upgrading, widening and adding culverts. Additionally, work to replace the large, corrugated pipe culvert at the 31km mark with a new concrete pipe is scheduled for the first quarter of 2022. A side track will be established to maintain access during this work.

The ongoing impacts to the Araluen valley community are significant. Support is available from the Eurobodalla Bushfire Recovery Support Service.